The electrohydraulic systems for energy saving on telehandlers
Walvoil 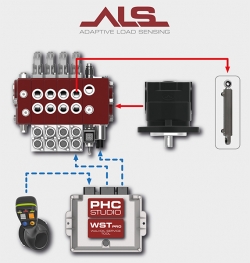 Hydraulic systems are an essential part of the most modern agricultural machinery, especially for telehandlers, which have now become irreplaceable for most companies.

To ensure the simultaneous control of movements with these systems, the hydraulic pump generates a higher pressure than necessary, a predetermined value called ‘stand-by pressure differential’ which has been considered acceptable until now, but which implies a considerable loss of energy, limiting the overall performance of the vehicle and unnecessarily increasing wear and consumption to the detriment of efficiency and the environment.

As a solution to this problem, Walvoil has created adaptive load sensing (ALS), a patented system able to modulate the ‘stand-by pressure’ value according to the real working needs of the machine, automatically varying it only when and how required.

ALS consists of a directional control valve, an electronic joystick and an electronic control unit, with customizable modular software developed by Walvoil. The control unit collects information from the operation of the controls and from the machine sensors, and acts on the load sensing device, adapting the hydraulic pressure differential to the maximum efficiency value required by the vehicle.

Through all tests, carried out in partnership with Dieci Srl, a leading telehandler manufacturer, the Agri Farmer 34.7 GD, equipped with the ALS system, showed a consumption reduction between 5% and 6% compared to the same model without ALS, a drop in energy dispersion value equal to 28% during boom operations and a drop of up to 45% during traveling phases.

In addition, in the positioning accuracy test, a higher productivity of the machine was clearly noticeable; the improved controllability of the precision function in fact allowed 14% more operating cycles in the same amount of time.

This last testing phase has highlighted further important advantages in terms of safety, stability, flexibility and modernization: the few elements of the ALS kit can, in fact, be easily installed even on older telehandlers, extending their operating life and improving their performance.