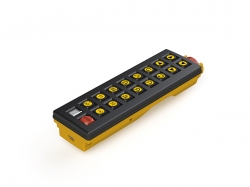 NBB Controls + Components was founded in 1977 and has developed into a leading radio manufacturer. Its products are developed and produced in Ölbronn-Dürrn and the company guarantees its quality as expected from ‘Made in Germany’.

In March 2022, its range was expanded to include two handy and compact transmitters, Planar-B+ and Planar-C+. In both devices, an Li-Ion battery is integrated, charged via a charging cradle or via a standard micro-USB charging cable. The transmitters are rated to IP67 and IK07 and the frequency range covers 2.4GHz.

The Planar-B+ transmitter is equipped with an integrated 1.2-inch monochrome display. Due to its somewhat larger design, up to 17 one-stage or 6 two-stage buttons can be programmed.

The Planar-C+, on the other hand, impresses with its small and flat design and can be custom-built and programmed with 15 single-level or 6 two-level keys. The application options for both transmitters are versatile and range from skip loaders to conveyor belts.