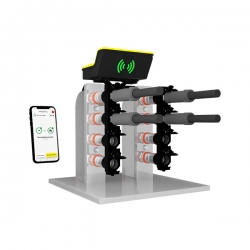 After undertaking user experience field research, interviewing many different players in the industry (end users, dealers, OEMs), Faster has gathered much useful data about the operation of farm machinery and implements. Following its research, the company had a clear vision of the main issues each segment faces in its daily activities. For instance, one of the most significant risks of inefficiency on farms is linked to achieving the best hydraulic connection between the tractors and implements. Most tractors have rear hydraulic ports characterized by colored indicators, but what about the implements? Specialist tools used for a single task and then deposited in warehouses until the following season often do not have clearly marked inlets, leading to potential misconnection when they are put back into use.

Despite rapid innovation in agricultural machinery, managing this risk is still achieved using workarounds – painted implement tubes, colored clamps, stickers and so on – to ensure that every possible tractor-implement combination in a fleet can operate at maximum efficiency and with an identical UX for all operators.

To remove the risk of non-optimized or incorrect connections, Faster has worked on an innovative system called Faster ABC, where ABC stands for Always the Best Connection. The system guides the final user to create a pairing between tractor and implement, directing the correct connection of each hose to the respective port and saving the pairing for future use.

The Faster ABC smartphone app guides the operator through this process. The ECU on the implement can be connected to the tractor via CANbus, so any information on the implement (nominal working power, pressure, oil flow) can be used for tractor hydraulic power fine-tuning and thus fuel-saving. A green LED light shows the best connection port for each implement hose on the tractor side.

The system also gives a confirmation of the correct and complete connection between male and female couplers, allowing data collection that will enable a preventive maintenance algorithm to suggest when it is time to replace a coupler. The Faster ABC app provides visual support during all the pairing and connection phases – creation of tractor and implement fleets, a new configuration, guided connection phase, modification of a configuration – and warns if something goes wrong. Faster ABC – Always the Best Connection won a Systems & Components Trophy during Agritechnica digital.