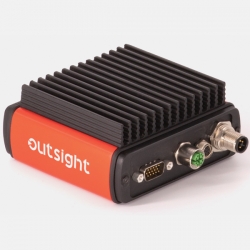 Outsight will demonstrate the most recent version of its pre-processing software, which enables autonomous system developers to use and integrate any type of lidar sensor with ease.

The Augmented Lidar Box (ALB) is a real-time software engine that makes working with raw 3D data simple, allowing any application developer or integrator to incorporate lidar into their own solutions without having to become a 3D lidar expert.

This plug-and-play device has a broad set of fundamental features found in almost every application, such as localization and mapping, 3D SLAM, object ID and tracking, segmentation and classification.

The SLAM algorithm’s vehicle ego-motion information is commonly used in vehicle control loops where the relevant information is instantaneous movement or velocity, but it can also be used for mapping. This can be thought of as a velocity vector, or the distance between frames in meters, because a lidar typically provides data at a constant frame rate.

Because the ALB knows how the sensor has moved (both in translation and orientation) from the previous frame, the frame points can be accumulated over time in a consistent point cloud.

Then, from the frame where the feature was triggered to the current one, a super-resolution frame is created, which contains all the points. When viewed frame by frame, this increased resolution can reveal details of the scene that would otherwise be missed.

Moving objects detected in the lidar’s field of view are assigned a persistent ID across multiple frames as long as they are still considered present in the viewed scene.

All these features are designed to make it as simple as possible to use lidar in smart vehicles and mobile robotics applications.