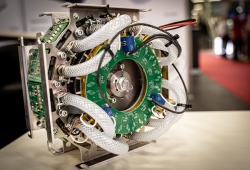 “Each inductor on the motor has its own inverter,” explained Wim Vander Kuylen, project manager at Bluways. “What that means is that you have complete redundancy: even if one fails, the motor will still run.”
The inverters and power electronics share a cooling circuit, while the use of SiC semiconductors means high switching frequencies for precise motor control and greater efficiency. “The integrated nature of the design means that instead of having two different devices to mount, you have just one with only three connections needed, DC+/- and the controller. Looking at the redundancy, it would be almost impossible, or at least impractical, to achieve using a separate motor and inverter system,” added Vander Kuylen

The development prototype shown at the expo weighs in at 10kg and operates at 650V with a 30A current draw.