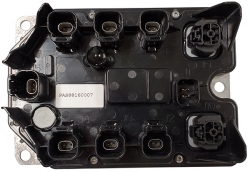 Controller Area Network (CAN) systems have been used in various machinery applications since the 1990s and in the past CAN was typically a manufacturer proprietary solution. This changed in 2001 when the agricultural industry worked to develop ISO 11783.

The ISObus system developed within ISO 11783 was the first of its kind for the International Organization for Standardization (ISO) and has allowed true inter-brand electronics operability and increased the precision agricultural machine functionalities that bring value to customers. The standardized connectivity and data protocols were further defined by the Agricultural Industry Electronics Foundation (AEF) which formed in 2008.

The universal terminal in tractors was a first for AEF, before task controller and section control allowed more precision farming to be realized in the field. As the first international CANbus standard, ISO 11783 is developing 'plug-and-play' simplified operation, via ISObus-certified machinery. This innovative agricultural technology has resulted in a need for more brand inter-operability. Now these same organizations are working to create a high-speed ISObus that will be 4000 times faster than the original ISObus and usable across multiple industries.

Today, the primary high-speed ISObus use case is integrating digital cameras from an independent architecture and offering a simplified system providing a more complete sensor fusion. Electronics and connectivity can be combined into one vehicle-wide system to eliminate redundant vehicle architectures. This new, high-speed system offers more precise datalogging which enables greater command and control of prescription data and more detailed display of information in the cab. The future of these machines will include autonomous capabilities, if not complete autonomous operation.

Attain such futuristic capabilities will require achieving control timing with a latency of microseconds, that can be sent over a reliable 1Gb/s data speed link that has signal integrity for up to 40m. Initially, this will allow digital camera coordination around large, heavy vehicles and even object identification. Agricultural machinery such as planting or spraying systems that use smart optics to control the direction and flow nozzle for each row they pass are now being developed. With higher data speeds, OEMs can create construction machinery that can use telematics to direct multiple earth-moving machines using shared prescription maps. Additional use cases include the tracking and pairing of an unmanned companion machine as well as remote camera views being integrated from such companion vehicles.

To create an architecture to meet the requirements of the hardware systems, a completely new technology has been used. How can we send a signal over copper wire for up to 40m across multiple mechanical connections? Aided by the automotive industry standard IEEE802.3bp for 40m, Single Pair Ethernet (SPE) was chosen for its simplicity. The SPE software that has been used is the Open Industry Alliance software OPC UA and other variants for different data speeds. A standardized 1 Gb/s Ethernet switch functions as the vehicle control interface and has DT high-speed IEEE802.3bp type A&B Ethernet connectors used for the medium dependent interface (HSI-MDI). These SPE connectors and shielded cables will connect the switch with any edge sensing and control solutions as well as cameras and in-cab monitors, creating a true plug-and-play high-speed implement bus.

Acting as the traffic lights for this system are the tractor control interface (TCI) and implement control interface (ICI). The Gigabit Ethernet switches for this system can be the same for both machines while meeting the AEF guidelines for the physical layer. Accordingly, Powell Electronics has developed the PAS88160007 Gb Ethernet switch that meets the AEF high-speed ISObus requirements. Utilizing the Powell HSI-TCI and ICI, the Gb/s Ethernet switch can save OEMs millions in R&D, testing and on tooling. This Gb Ethernet Switch is designed to act as TCI and ICI on machines for 12 and 24V battery systems. Seven ports of 100/1000BASE-T1 and two ports of 100/1000BASE-TX are available on this switch as well as Ethernet reprogramming and diagnostics capabilities.

The Powell high-speed ISObus Gb Ethernet switch is a one-of-a-kind solution for the latest technology used by agricultural machinery. This Gb Ethernet switch is built with Single Pair Ethernet industry standards, achieving 1Gb/s data speeds up to 40m. Powell Agricultural Solutions has continued its legacy from ISO 11783-2 into the new architecture designs and is offering the pictured product for sale from January 2023. Once again, Powell has focused on harsh environment, sealed, active electronics to support ISObus applications. These products will help its customers develop their precision agriculture technologies faster and cheaper.